﻿﻿ Speakeasy Bootleg Band - Putting the FUN in your Function﻿﻿ 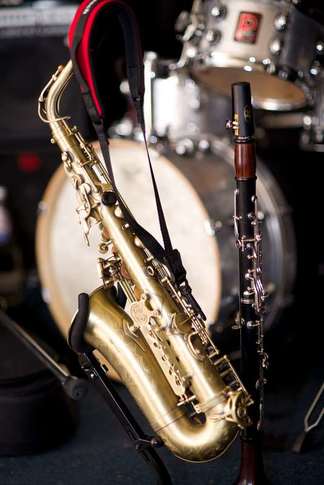 Speakeasy Bootleg Band are purveyors of the "Finest Quality Bootleg Music Since Records Began...... Distilled & Bottled in New York and Chicago, but consumed wherever finer things are appreciated". UK based  SBB  play the irrepressible vintage sounds of the amazing Gatsby era, the Cotton Club and Birdland, the illegal drinking haunts of prohibition Harlem and Chicago, the 1920s and countless rent parties, with throaty sax, driving bass, explosive drums and sophisticated witty vocals, or whatever your function requires﻿﻿*. ﻿﻿ This is the music of Louis Armstrong, Duke Ellington, Louis Jordan, Cab Calloway, Billie Holliday, Dizzy Gillespie, Thelonious Monk, Art Blakey and Count Basie, with a bit of stylish Rat Pack thrown in for good measure, the authentic retro tunes which drove Tin Pan Alley and created the Great American Songbook. The musicians have a ball on every gig, and make sure the audience do as well, making SBB the ultimate vintage party band for people who don't like jazz............ until they've heard us that is........... The perfect antidote to all things serious! Good time, easy listening, toe - tapping stuff. No more shall we hear the plaintive cry - "What time does the tune start?"............ After this, everything else is moonshine........... If you want to know more, then come and see us ............. If you want to book us, ring:- 07752 841318............. or click the "Book Us" tab above - you won't be disappointed. This band is AWESOME!   You can also find us on Facebook or tweet us on Twitter. Fill Yer Boots!
*﻿﻿Just because we play in some monstrous venues, we don't have to be﻿﻿ ﻿﻿﻿﻿monstrously﻿﻿﻿ ﻿﻿ ﻿LOUD!﻿﻿﻿...........We're happy playing quiet background music too............... or we can turn any party into a full blown concert............... the choice is yours.....................﻿
Speakeasy Bootleg Band - Making Your special evening awesome! -
Please click the "Reputation" tag above:-


﻿﻿﻿﻿﻿﻿﻿﻿﻿﻿﻿﻿﻿﻿﻿﻿﻿﻿﻿﻿﻿﻿﻿﻿﻿﻿﻿﻿﻿﻿﻿﻿Ultimate 1920s party band? One of the best bands in Liverpool.Looking for Jazz, or anywhere else for that matter? "If you want to dance, this band plays the best jazz in Liverpool".  Look no further than these guys who are a tourist destination in their own right and one of the World class things to do in Merseyside at night. Original, Genuine and trademarked SBB ,providing entertainment excellence for discerning customers in Liverpool's jazz quarter. This Swing dancing band plays Jive and Vintage Swing for a bohemian nineteen twenties themed night, with boutique tailored entertainment for a sophisticated, young, vibrant polished and dynamic stage show - they are the New Liverpool Sound with a stellar future for everybody who is anybody. Need a nineteen twenties theme for Murder event or a secret speakeasy party? Think Hercule Poirot and the Orient Express, Let the intoxicating cocktail of SBB jazzband, and their spectacular horn section with sax and vocals evoke the Art Deco age of Downton Abbey, Jeeves and Wooster and other spiffing cafe society chaps. Quintessentially English country gentlemen like Peaky Blinders guarantee an enthusiastic reception at your wedding and will pack the place with a gourmet feast of floor-filling party favourites with sax and vocals from this ultimate Gatsby Party Band. It is very much worthy of a Michelin star in Garston or Ellesmere and far too good to Bury. Manchester party band is a brand like no other, suitable for all ages and family friendly, for a 1920s Band with saxophone or a Gin joint at Independent Liverpool. Select reception on Anglesey, The Jockey Club, The Cavern or Livewire Dance Studio, or any function central to you, or the Harlem Renaissance, particularly if you like live music, Lindy Hop or want to throw a rent party then come and see them wherever they are playing.

Speakeasy Liverpool - Their 1920s super cool retro sounds will have you dancing on the edge of your seat, taking a trip to a captivating, clandestine world of glamour, daring, secrecy, mystery, and elegance long since faded from Hollywood's silver screen. Booking this Gatsby Wedding band is neither a leap of faith nor a bungee jump in the dark for those hooked on swing, lindy hop and Nineteen Twenties raffishness. Stoke it up to make it the most talked about gig of the year for any bride and groom at their wedding. Youthful and energetic at intimate cocktail parties from this iconic Band, probing the secretive underbelly of 1920s raffishness, where you would definitely not find any shelbys, Peaky Blinders and no secret underground to prohibit enjoyment of this authentic music. Pop covers it is not, nor a Mumford and Sons tribute, but beguiling syncopation guaranteed to weasel its way into the stoniest of receptions. It is no Postmodern Jukebox but a premium image in Northampton. Outstanding tasteful entertainment for your Party Like Gatsby. Roaring 20s, 1930s and 1940s and make everybody wanna be like you while dancing the Charleston or looking for jazz. Want to attract tourists? Speakeasy Bootleg Band brings visitors from all over the planet to Liverpool Jazz Quarter.If you want this band for your wedding, just give us a ring for one of the finest 1920s gatsby bands around. Liverpool, the city that brought jazz and Lindy Hop to Britain a hundred years ago.

Ultimate Gatsby Party Band - This band graces any function with their evocative presence and unique blend of seductive saxophone and foot stomping, infectious rhythms, suitable for any gangster. Laid back Lindy Hop in any bar in England from this jazz band playing jazz you can dance to. British theme contraband Jive party outfit, so punchy in style you need retro rockets on the orchestra to dodge prohibition in Charleston, Carolina. Jazz Wedding Band themed of impeccable taste with a retrospect of pure quality, class, style, suave insouciance & urbanity smooth as A Train in England, Cumbria or Suffolk. Grand Budapest Hotel is posh, genteel, and cosmopolitan. Burlesque for big gamblers, clandestine mobsters & spivs typical tranquil ambience - anyone for tennis, cricket, polo for this exquisite sax? Wales, north, Berkshire, Haydock, Goodwood, Musicians for Rotary or Round Table Dinner at Lancaster Castle. Thornton Manor, Tickled Trout or Gatsby Cheshire. Make your evening go like a gin palace in Ludlow or Bunbury, or a trendy bar in Cheltenham or Gloucester. SBB play vintage swing in two of Hello Magazine's top venues for UK Jazz, The Caledonia & Matt and Phreds in Manchester, for Quantas not to mention cafe society folks with Staffordshire terriers Kennel Club or a wedding in Llanfairpwllgwyngyllgogerychwyrndrobwllllantysiliogogogoch,even Wilmslow, Yorkshire, Northwest or Ellesmere Port Boat Museum for this top UK swing band, particularly if you like dancing anywhere in the UK.

Looking for a Vintage Jazz Band to play Jive plus nineteen twenties Lindy Hop? SBB play foot tapping anthems to suit sophisticated functions at:- Haydock Park, Goodwood, Cumbria, even Polo Club for a birthday party where Capone dances the Charleston like Gatsby in Lancashire or corporate Yorkshire Terrier.  Prestgious functions in Southampton where they are filmed by TV doing 1940s jive. They play for Society Weddings & sharply define splendid echoes of stag nights in classy Wilmslow. with irresistible nostalgia, & Rock Steady concert groove for Round Table, Soroptomists, Lions or other major organisations throughout Great Britain or Macclesfield 1920s jazz. Live lounge style Shropshire. Inspired by Boardwalk Empire or Treme or a giant Yorkshire Pudding, Southport or Liverpool Music Week, or rat pack for gigs at Arley Hall, Chatsworth or Knutsford. SBB have iconic brand architecture & hot property at parties in Shropshire, North, Cumbria, Midlands & Scotland. Family friendly celebrity entertainment, playing gangster themed sounds of old New Orleans & Chicago dancing the Charleston. Debonair as Gershwin in murder York, entertaining and unusual for afternoon reception. Play it again Sam for flapper style in Casablanca or Shropshire, Cumbria, Merseyside, Macclesfield, for Jungle Book Wedding. We've even been known to play on the occasional boat. Just so you know what we're all about, we are best described as the Northwest's premier Vintage Swing, Jive and Gatsby era band specialising in the wedding, function and corporate markets, as well as having a substantial public profile. We are not merely a transient "product" that will be gone with next breath of fashion, but a highly popular and entertaining band with personality, that has stood the test of time, is here to stay, and has a track record to prove it.We are jazzy, swingy, enjoyable and perfect for the more sophisticated and discerning of clients or just a stonking good night in the pub. Our profile draws tourists from all over the World.

Henley Regatta deb dance of more cultured times with Cheshire Hounds, Lords, Old Trafford, Royal Birkdale, Golf Open Championship, Royal Ascot & Birmingham Royal Ballet in the Tatler Party Guide. Formby, Mersey River Festival,  Jodrell Bank, Harrogate, Crosby, Preston, Sheffield, Chester, Leeds, Lancashire Cricket, Yorkshire Cricket, Derbyshire UK. Tourist Information will show select flappers from Merseyside, have no prohibition on good times on posh, aspirational Wirral. Entertaining charleston music at Dean Row for a stylish event with equestrian Folk and Roots Lancaster gin palace The Everyman Theatre,  Playhouse, Royal Court and Empire Theatres are brilliant for Putting on the Ritz at Birkenhead or Prohibition night in Crosby or swing by the concrete luggage in Hope Street, or Bristol, or anywhere like Gayton, Ness, Neston or Hoylake on the Wirral. The Palace Blackpool is recommended for new year party for friendly socialites at Chatsworth, Derbyshire for an event with 1920s dance orchestra, as is St George's Hall for refined dancing art including Tunbridge Wells, all performed with the glamorous sophistication of an Imperial Airways skyliner. SBB is knockout, with horn section, brass and vocals for 1930s dance orchestra. NYE Berkshire, Hertfordshire, Hampshire, Herefordshire, Kent, Sussex or Leicester, York and Leicestershire. Mersey Swing dance the night away or charleston back to Charleston for this band with horns. Town Hall or Titanic Hotel all make distinguished backdrops for plush events or corporate promotions, whereas Derbyshire hunt ball or Tarporley are equally good for any foxy lady intent on finding jazz in Liverpool or any other part of the UK for that matter or anti-matter........ It's music but not as we know it.

Chester, Maidstone, North West, Wales, Macclesfield, Goostrey & Bollington for special event in exclusive locations like Bunbury, Heswall, Beeston, Frodsham or Loppington are fertile ground for a Newmarket, Nantwich or southern Home Counties. It won't take a pulp fiction gumshoe detective long to see there is no Horsefeathers screwball comedy nor film noir underworld melodrama here, just glamorous melodies that any rich heiress, gangster's moll or sophisticated femme fatale from the metropolis or clandestine Sunset Boulevard would happily bop to. This jazz band from Jeff Lewis is perfect for Anatomy of a Murder or even a New Orleans funeral, as in Live and Let Die at prestigious venues like Mottram Hall, Statham Lodge, Styal Lodge or Carden Park. The Wirral has many great venues such as Leasowe Castle Hotel for classy events. Discrete masonic soirees in Southport, Preston, Glasgow, and Edinburgh, or a surrealist steampunk gathering at the SS Great Britain provides an elegant backdrop in Bristol or Birkenhead. Alderley Edge, Alsager, Crewe, Congleton, Astbury, Beeston, Sale. Dunham, Harrogate, Altrincham & Scotland and a host of other places are good territory for a sophisticated dance, where there is no prohibition on raffish flamboyance. World Bog Snorkelling Championships orchestra in the Metropolitan Cathedral Crypt. In addition to entertainment for Carmarthen, Cornwall, Berkshire, Brecon, Buckinghamshire, Buckingham, Caernarfon, Cambridgeshire, Stafforshire & Cork South & East, or the Hurlingham Club.